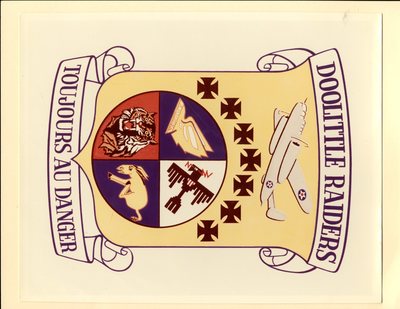 The official emblem of the Doolittle Raiders, including the slogan "Toujours Au Danger" ("Ever Into Peril") and incoporating representations of all the crews who took part in the mission. The plane at the top is a Mitchell B-25 bomber, the aircraft used in the raid; below the plane are seven Maltese crosses, which represent the 17th Bomber Group. In the circle are representations of all four squadrons involved. Clockwise from upper left: a Winged Helmet for the 89th Reconnaissance Squadron; a Thunderbird for the 34th Squadron; a Kicking Mule for the 95th Squadron; and a Tiger's Head for the 37th Squadron.